The sketchbook complete! from A&E Creative

JUST when I finally started to catch up on entries, another giant creative distraction took hold of me over the past few weeks: The Sketchbook Project.

Due to the weather and the massive influx of sketchbook delivers, the Art House Coop granted a 3 day extension. I’m sure (in fact I KNOW) that I wasn’t the only one who managed to complete this fabulous thing on time because of this; those 3 days were a god send. Yesterday, after numerous cuttings, pastings, scrappings, and adherings, I sent my newest pride and joy off to join the other 29,000 sketchbooks participating in this wonderful project.

Here’s a rough & tumbled scanned version of my beloved book. I have a bazillion more photos to be uploaded, but for now this will do. 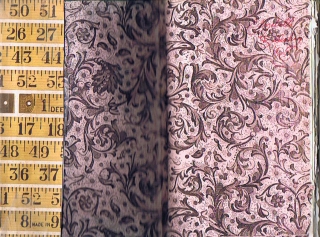 For the first page I wrote a short autobio:

Elizabeth Bollenberg is a 27 year old gal out of Cambridge, Ma. Though she has a B.A. in Graphic Design and Illustration from Maine College of Art, she has been around the arts all her life. Her mother, artist Debbie Clarke, gave her a paintbrush to hold before she could even walk; later in life, after she mastered much of her other dexterous limbs, she was given a violin as well. Thus, a two-face competitive relationship with sight and sound was born. Aside from art, Elizabeth also also enjoys cooking, watching snowstorms, and writing autobiographies in third person.

She grew up in Gloucester, Ma, with two parents who both, at one point in their lives, picked one of the five senses to be devoted to. Her mother chose her sight and has been a painter for 40 odd years; Debbie’s sketchbook can be found in the section “Down Your Street.” It is the feral-looking wax thing frothing in that category. If you ever have the wonderful privilege to meet Ms Clarke, you will immediately see that it suits her nature perfectly. Elizabeth’s father, the late Donald Bollenberg, was a chef trained in Belgium. He, too, was also a musician. Before his death in 2003, Elizabeth was entering into Berklee College of Music, in Boston. After a short stint there, she took some time off to focus on her family. Two years later, she gave art school a go. It was a very expensive success.

Though Elizabeth still loves music and her violin, art is more present in her life than ever. It has helped her to regain her emotional and spiritual strength, as well as remember life events that should never be forgotten. Her latest endeavor is photography and she has been taking a self portrait a day for over a year and a half. She never puts one passion down for another, but rather simply juggles more and more as she enters into different stages in her life. Chaos is such a beautiful and strange theory. It is an even more enchanting thought to truly believe that the flap of a butterfly wing can be the start of a hurricane. She does believe in this whole heartedly. Just think, if her father hadn’t died when Elizabeth was 19, this sketchbook may have never been made. You, dear reader, would never have picked it up to learn entirely too much about this one stranger’s life.

Sketchbooks are diaries for artists. The pages within can’t help but to become personal, almost secretive. Some of the papers and thoughts within the these pages Elizabeth had been holding onto for years, if not decades. Though she is still searching for her place in this world, it is wonderful to have found a place for all that this book contains.

Be good to this. She’s pretty sure it holds part of her soul. 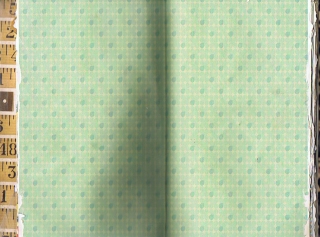 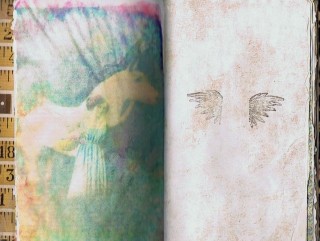 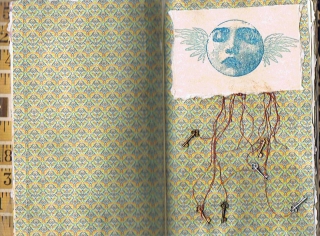 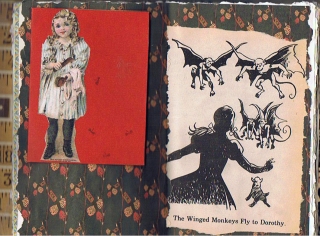 I was a little surprised at how personal this project became for me. I was eager to share my art and make it more public, but I never realized that this book would take so much with it. Most of what I included could never be replicated, even if I tried.

Throughout the book, I added mini envelopes (later, after the scans) that I filled with scrappy business cards with my contact info & this blog’s address. 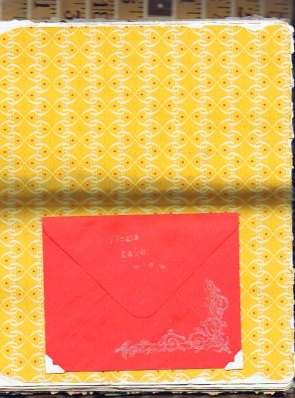 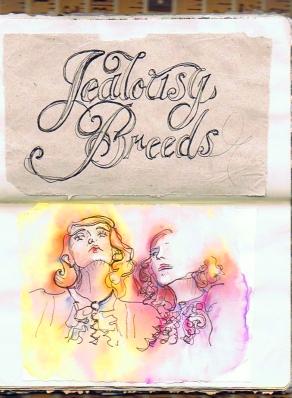 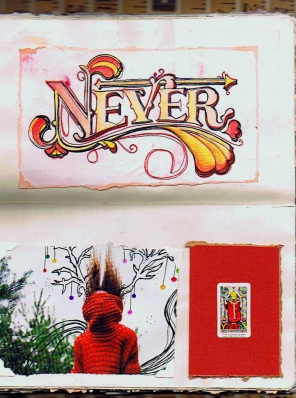 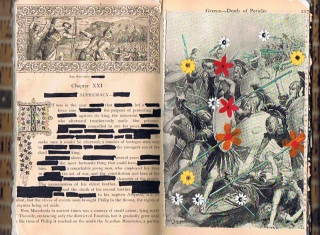 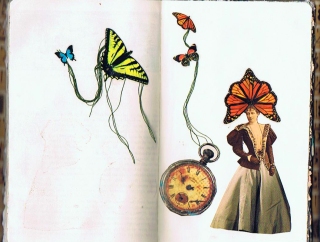 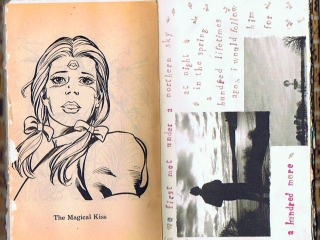 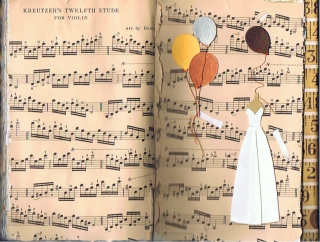 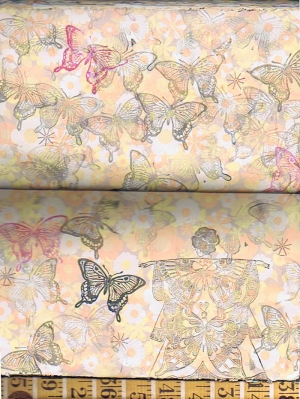 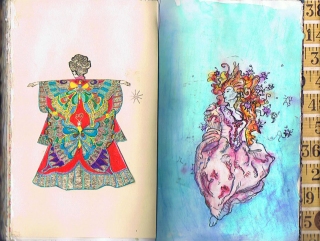 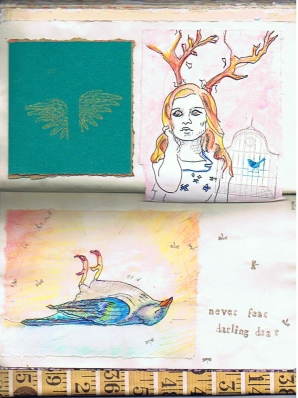 Like Loading...
Posted in Gloucester, Ma, Sketchbook Project, Something Sketchy | Tagged Adhere to Me, anything and everything, art house coop, collage, elizabeth bollenberg, sketchbook, something sketchy, the sketchbook project | 3 Comments
Posted on December 29, 2010 by debclarke

Posted on December 7, 2010 by somethingsketchycarolmckenna

Here are some pics of the final wrap up of the Sketchbook Project 2011 by Carol L McKenna and ArtMuse Dog: 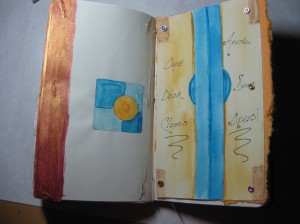 BECAUSE of other various projects, I haven’t been able to work on my sketchbook for the past few weeks and thus there’s been a lack of updates. Sorry! So here’s a snippet of what I’ve started up with:

The hand written typography is something that I’m really excited about! I haven’t been terribly active with type in a long time, and it felt incredibly satisfying to do some hand lettering. Some are visuals that I copied by eye, just to get my craft back, but none are traced from the source. The ‘u’ in the pencil draft needs to be corrected though….its opposite slant is driving me crazy, sketch or no sketch.

Posted on November 20, 2010 by somethingsketchycarolmckenna

(Just another sketch page for the project)

Good Morning, World ~ My owner is at it again. She has another watercolor sketch for the project. Plus, she seems to like my writings I think she might be enlightened. Sometimes, she tends to analyze and makes things too complicated. This morning, as we watched the sunrise, she  had a different look to me. I am not sure what it is. Why might she be enlightened? Well in ‘ dog speak’ what I understood her to say is that today  is ‘our day’ and that what we are going to do is “play”. All day, she said: ‘We are not going to do anything but play.’ Hmmmm,  at least for today she is going to take my advice and do what I do best ~ PLAY !

“Saying no can be the ultimate self-care.”
(Claudia Black)

Posted on November 11, 2010 by somethingsketchycarolmckenna

This photo is part of the Sketchbook Project that my owner decided to enter. The project is keeping her busy and she says it is quite interesting. What is the Sketchbook Project? It is a traveling event whereby you enter the sketchbook that you purchased from the event after you have filled it up with art.  Then in January you send it in all finished. Then it begins to travel around the United States to various libraries and then comes home and is housed in the Brooklyn library. (wonder if they have dogs in the library?) In her Sketch Book, she is including pencil sketches, watercolor paintings, favorite quotes with watercolor background and recycled watercolor paintings that really didn’t work for her. Personally, I would have welcome the dropped pieces and chased them around. Nope, now she is going “green” and trying recycle everything. I will still hope for the “crumbs” that I can eat or use as a toy.
This particular collage piece above is one of those “recycled babies” ~ I looked real closely and laughed because in the center it looks like one of those “Where’s Waldo” types or even one of the guards at Buckingham Palace. Look closely and let me know if you see it also? My owner can get real weird sometimes; yet you know I love her and sit and watch faithfully what she creates. She thinks I am sleeping and that is okay I will keep watching. She is soooooooo much fun to watch.
Now, my owner has decided that I can be the writer of this blog because I am always snuggling up to her laptop and she says I interrupt her when she is typing so now I get to do the typing. Boy, what I get for being so faithful and loving. Yep, I get treats, walks, hugs and to be near her most of the time. She sometimes goes out and leaves me home to take care of the house. I don’t mind, I love her and I know she loves me. So, I try to give her good “mojo” so that she will be happy creating and creating wonderful creations from her soul. You are probably laughing that a “dog” is writing this but I am. I am a real smart Yorkie; not just a cutie, you know.
Hugs and namaste,
Artmusedog
PS. Do you know what namaste means?
http://artmusedog.blogspot.com

here’s the ‘back’ of the sketchbook with the necessary barcode. i wonder if they will be able to scan the code. better get out the iron and try to clean it up.

and here is the front:

i may/may not share the contents here.  ready to ship at any time.  unless i change my mind.

down your street dancing on the Kamchitka.  the volcanoes went kablooey yesterday, and the volcanoes in indonesia blew up a few days before.

Posted on October 29, 2010 by somethingsketchycarolmckenna

In creatively thinking about how I would protect my Sketch Book for this project, it took several weeks of reflection and experimenting before I decided what I would do. My main purpose was to protect the book. My second concern was to “keep it simple”. My life can be rather complex so I didn’t need to add to the chaos that can so randomly occur. Therefore, I now have a very simple, yet “artsy” cover for my Sketchbook. 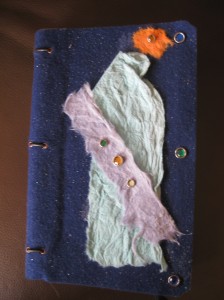 Hopefully, you will be able to see the picture as I try to figure the wordpress technique of uploading photos and what happens to them after you have uploaded them And you thought us Artists just sit around and play all day ~ HUH! ~ Enjoy.